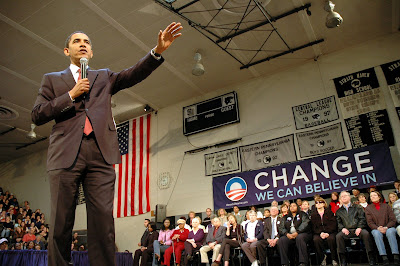 Henry Rome/The SPOKE
By Seth Zweifler
News Copy Editor
WALLINGFORD—It all started as a rumor. The word in the halls was that Sen. Barack Obama, a leading candidate to be the 2008 Democratic presidential nominee and possibly the next President of the United States, would be speaking to students, faculty and community members at Strath Haven High School.

For once, this was a rumor that proved to be true. Obama held a town hall meeting in the Strath Haven gymnasium on April 2, speaking to a group comprised heavily of high school juniors and seniors.

After a brief policy speech, Obama answered questions ranging from topics about AIDS research to the war in Iraq, but made news at the very end of the meeting by saying that he would consider former Vice President and environmental activist Al Gore for a cabinet level position if he were elected to the White House.

"I would," Obama said. "Not only will I, but I will make a commitment that Al Gore will be at the table and play a central part in us figuring out how we solve this problem. He's somebody I talk to on a regular basis. I'm already consulting with him in terms of these issues, but climate change is real. It is something we have to deal with now, not 10 years from now, not 20 years from now."

According to Strath Haven senior Sam Hargrove, Obama’s visit, which marked the culmination of a six-day Pennsylvania bus tour, showed the increase in attention this primary has garnered, especially from those who are young, first time voters.

“I think there’s been a major shift in the political climate here. [...] People are definitely starting to pay attention more, because this is the first time many of us will actually have a say in the future of our country.”

“I’m amazed by how my students, especially those who can vote, are getting involved this year,” said Strath Haven politics teacher David Waldman. “It’s really something I don’t ever remember seeing. There was a time when young people didn’t think that politics had an impact on them, but now it seems [that time] has come and gone.”
Posted by The Spoke at 3:15 PM