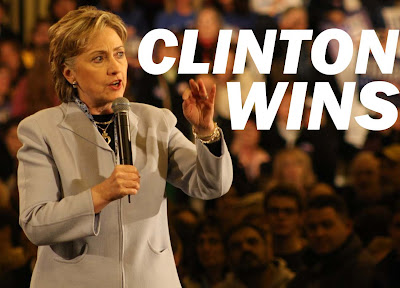 UPDATE--7:40 a.m.--Sen. Hillary Rodham Clinton (D-N.Y.) won Pennsylvania decisively last night by a 10 point margin, 55 to 45 percent. Sen. Barack Obama (D-Ill.) won several counties in Southeastern Pa.--including Philadelphia, with a 30 point margin--and counties in central Pa., but lost heavily throughout the rest of the state. Obama won in Chester, Lancaster, Delaware and Philadelphia counties in Southeastern Pa., including a 55-45 percent margin in Chester County.
The next contests are in Guam on May 3 and Indiana and North Carolina, together on May 6. --HENRY ROME
Posted by The Spoke at 8:54 PM