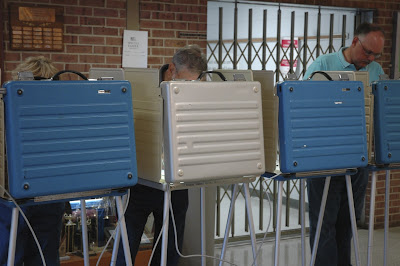 WAYNE - Pennsylvania voters flocked to the polls today for the state's critical primary, a primary that has been called by some analysts the deciding force in determining the Democratic presidential nominee.

Polling stations were busy today across Chester County. At one polling station in Devon, roughly 70% of the precinct's Democrats voted with still over an hour left for voting, according to party and election officials, reflecting the intensity and anticipation of the race, especially among the Democrats.

Analysts say today's Democratic primary between Sens. Hillary Rodham Clinton (D-N.Y.) and Barack Obama (D-Ill.) will decide who wins the nomination. Harrisburg-based political analyst David La Torre said in an interview with The Spoke that the primary is do-or-die for Clinton.

"This primary means everything for Hillary Clinton. If Hillary Clinton loses, she's done. If she wins, there's a good chance she can take the nomination," La Torre said.

"Typically, Pennsylvania has been a foregone conclusion. Now all Pennsylvania voters really have an opportunity to select the eventual nominee."

Both candidates have focused heavily on Pennsylvania over the past few weeks, making dozens of visits to the state. Tonight, Hillary Clinton will host an election results party in Philadelphia. Barack Obama will move on to Indiana, where he, along with his wife, will hold a rally with singer John Mellencamp.

After weeks of hard campaigning in a primary that could mean everything in the presidential race, the campaigns today sent out last e-mails to supporters pleading for volunteer support or votes.

"Everything we've worked for together comes down to what we do in these next few hours," Obama Pa. State Director Paul Tewes said in an e-mail.

"This race is close, and we need every last vote in Pennsylvania," Clinton Pa. State Director Mary Isenhour said in an e-mail.

At the Baptist Church in the Great Valley, in Devon, the warm spring weather and calm atmosphere at the polling place belied the intensity of the past weeks. Party officials earlier tonight offered sample ballots to those about to enter the voting area, which was inside a cramped room in the lower level of the church.

"We have all the excitement," Rochelle Rabin, the precinct Democratic Committee person, said. "There's a lot of anticipation."

Rabin, along with other officials, manned the Democratic table, which featured literature from both the Obama and Clinton campaigns. The Tredyffrin Democrats have not endorsed either candidate.

Inside the polling place, voters did not touch screens or punch ballots but instead circled in holes--not unlike the SAT.

"It's been a long time" since I've taken the SATs, voters could be heard saying as they filed through the voting lines.

"I was sorry I didn't bring my reading glasses," Rabin said.

Up to the minute coverage. You can count on the Spoke!