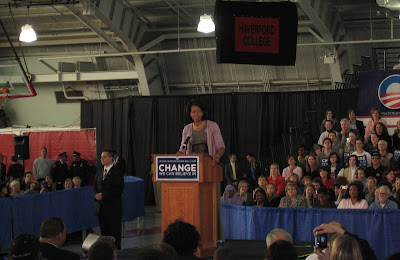 Michelle Obama, amidst calls that her husband is an "elitist" after he made controversial comments at a fundraiser in San Francisco, stressed their less-than-privileged childhoods and struggle to achieve financial security. Michelle Obama also assailed the No Child Left Behind Act, saying it is "strangling the life out of the education system."
As her speech came to a close, she reminded the crowd why she feels Barack Obama is different.
"There's something special about Barack," she said. "If we are going to thrive and change this nation, we need a whole lot of inspiration."
Posted by The Spoke at 5:00 PM