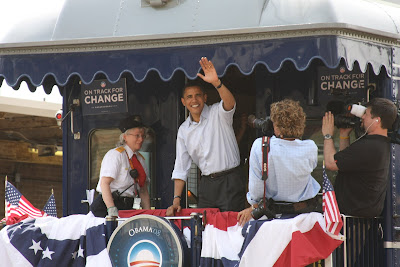 Jonathan Yu/The SPOKE
By Sonia Khandekar
Managing Editor
PAOLI—As the train pulled into the station, Obama stepped onto the Paoli Train Station for his whistle-stop railway tour aboard the “change train,” amidst chanting of “Yes We Can” and “O, B, A-M-A, he’s going to change the USA.”

Democratic presidential hopeful Barack Obama boarded a patriotic train car, heading from Philadelphia’s 30th Street Station towards Harrsiburg, as part of his “Track for Change” campaign. Obama addressed a crowd of 3,000 supporters in Paoli Station’s parking lot, touching on subjects ranging from the economy to the need for political change.

Obama noted the importance of the approaching Pennsylvania primary, emphasizing that Pennsylvania voters have the opportunity to make history.

The speech included familiar Obama campaign statements, especially the need to change the way politics works and how business is done in Washington.

“We’ve got to look forward, not backwards,” Obama said. “Unless you’re willing to bring about change, change won’t happen.”

Obama also used the train platform to note the differences between his platform and that of Hillary Clinton, as well as the flaws in John McCain’s policies.

“We [the Democratic Party] are going to be unified in November, but [right now there is a choice],” Obama said.

Obama criticized the Bush Administration, highlighting that a McCain presidency would be “another Bush term.” He stressed that “the name of [his] cousin Dick Cheney would not be on the ballot.”

“We [Cheney and Obama] have not gone on a family hunting trip yet,” Obama jokingly added.

By the end of the speech, cheering supporters could be heard shouting “You’re the man,” and “I love you.”

Obama emphasized that he is the best candidate running and under his presidency, “we can have a government of and by and for the people.”

At the end of the speech, Obama walked around shaking hands and signing autographs of supporters, thanking them for their backing.

“Thank you Paoli, I love you,” Obama said.