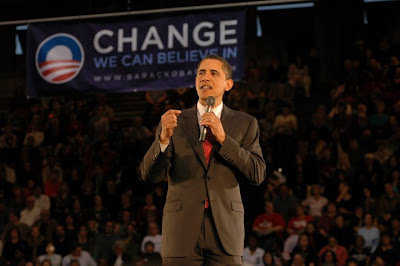 Henry Rome/The SPOKE
By Seth Zweifler
News Copy Editor
ALLENTOWN—The Muhlenberg College Memorial Hall gymnasium was packed to the brim on March 31, as presidential hopeful Sen. Barack Obama made his first stop in the Lehigh Valley during this campaign cycle. Obama’s visit drew more than 3,500 college students, community members, activists and college faculty to Allentown for the Monday night rally. The stop, which was part of a six-day bus tour across Pennsylvania, marked the first time a presidential candidate had visited the campus since Richard Nixon did in 1968.

Obama’s visit to Muhlenberg represented the value that his campaign has placed on soliciting the youth vote, one that hasn’t proven to be of the most importance in past primaries.

“I think he’s re-energized the youth vote through his inspiring words and underlying message of change,” said Angela Light, a graduate of Muhlenberg College. “He seems to be able to relate to the next generation and has a way of expressing himself like no other candidate has, in my opinion.”

During the rally, Obama stressed how he wants to change the “broken politics of Washington,” a message that has been the backbone of his campaign for the past 15 months.

“I’m not running to fit into the Washington mold – I’m running to break the mold,” he said. “We must change how politics is done in Washington. We have to shake it up.”

The Memorial Hall gymnasium was described as being a “mob scene” by Allentown resident Marc Jacobs. Although those in attendance were instructed not to bring signs to display, many found ways to maintain a high level of excitement, as chants of “Yes we can!” and “We want change!” could be heard above all other chatter as the night progressed.

“This is history we’re witnessing right here,” Jacobs said. “It’s hands down the most important primary Pennsylvania has ever had, and I hope that everybody here realizes that.”