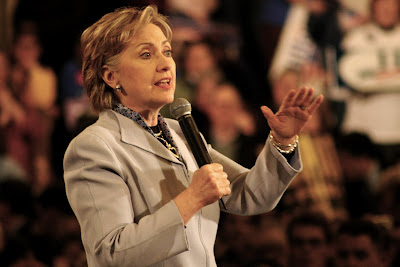 Clinton stressed her plan for economic reform, such as giving tax breaks to the middle class and taking away subsidies from special interest groups. Citing the industrial plant around her, she emphasized expanding factories to cause a ripple effect in the economy. The Keystone Industrial Plant was originally the economic center of Fairless Hill and an old U.S. Steel plant that had went out of business. Currently it is a wind-turbine manufacturing facility.

“Pennsylvania has gone through rough times,” Clinton said. “I believe we can turn this economy around.”

“Right now I’m undecided. I want to see what [Clinton] has to say about manufacturing, trade, and job loss,” Musho said.

Clinton’s visit to Fairless Hills also attracted Hillary supporters, young and old, from around the area. More than 1,000 supporters gathered in the industrial complex.

While the main focus of the event was on the Pennsylvania Economy, Clinton also addressed other aspects, such as health care, college tuition and energy.

“I [expected] the event to mostly gather votes,” said Sohini, a student from Bensalem, Pa. “I believe that Pennsylvania could be a major role and could actually decide the election.”
Posted by The Spoke at 12:38 AM