Power of Obama and Yoga 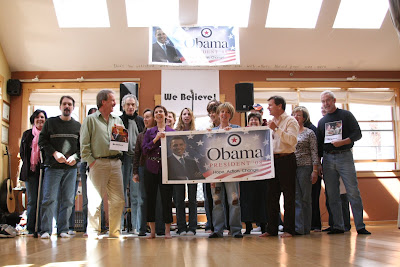 Jonathan Yu/The SPOKE
By Matthew Schaff and Sanjana Bijlani
Op-Ed Copy Editor and Staff Reporter
THORNTON—“We’ll have fun,” said Charlie Phillips as he invited his fellow Barack Obama supporters to take off their shoes and enter his studio. The “fun” that the proceeding experience brought them reflects a new medium through which Greater Philadelphians are expressing their political enthusiasm—the medium of music and rhythm.
Phillips, a yoga instructor and singer-songwriter, hosted a pro-Obama event at his privately owned yoga studio in Thornton, PA on Mar. 30. Inside the sun-lit instructing room at “Charlie’s Yoga and Massage Studio,” Phillips led the participants in a video-taped group sing-along. They sang three run-throughs of “We Believe,” a song written specifically for the event by Phillips. It includes parts for a soloist, guitar, and chorus.
“I just thought it’d be a good idea to have a rally of sorts,” said Phillips. “I wanted to create a song that people could [sing] along to it, but with enough meat behind it.”
Even though he stressed his “studio as a center for self-realization,” and that it “does not want to cause controversy,” Phillips was not subtle in his expressing his personal political views. “I’m a progressive. I certainly don’t espouse the tenets of Republicans. We have to move forward.”

Phillips is an enthusiastic Obama supporter. He refers to US Sen Barack Obama as being “someone with a vision and extreme intelligence. He offers a new brand of politics.” Phillips does not regard US Sen Hillary Clinton in the same positive light. “I like Hillary’s policies, but
she would create polarization. People either love her or hate her. I don’t think we [should] have four more years of this kind of government, or gridlock,” he said.

Attendees of Phillips’s sing-along had their own viewpoints about the junior senator from Illinois.
“I was impressed with Obama ever since the last convention,” said Kathy Richard, a member of the Thornbury Township Democratic Party.

“He’s awesome,” said Elisa Cawley, a junior at Unionville High School. “Obama is a real person. I think he really cares about the American people. He is a very unifying force.”
Posted by The Spoke at 11:11 PM